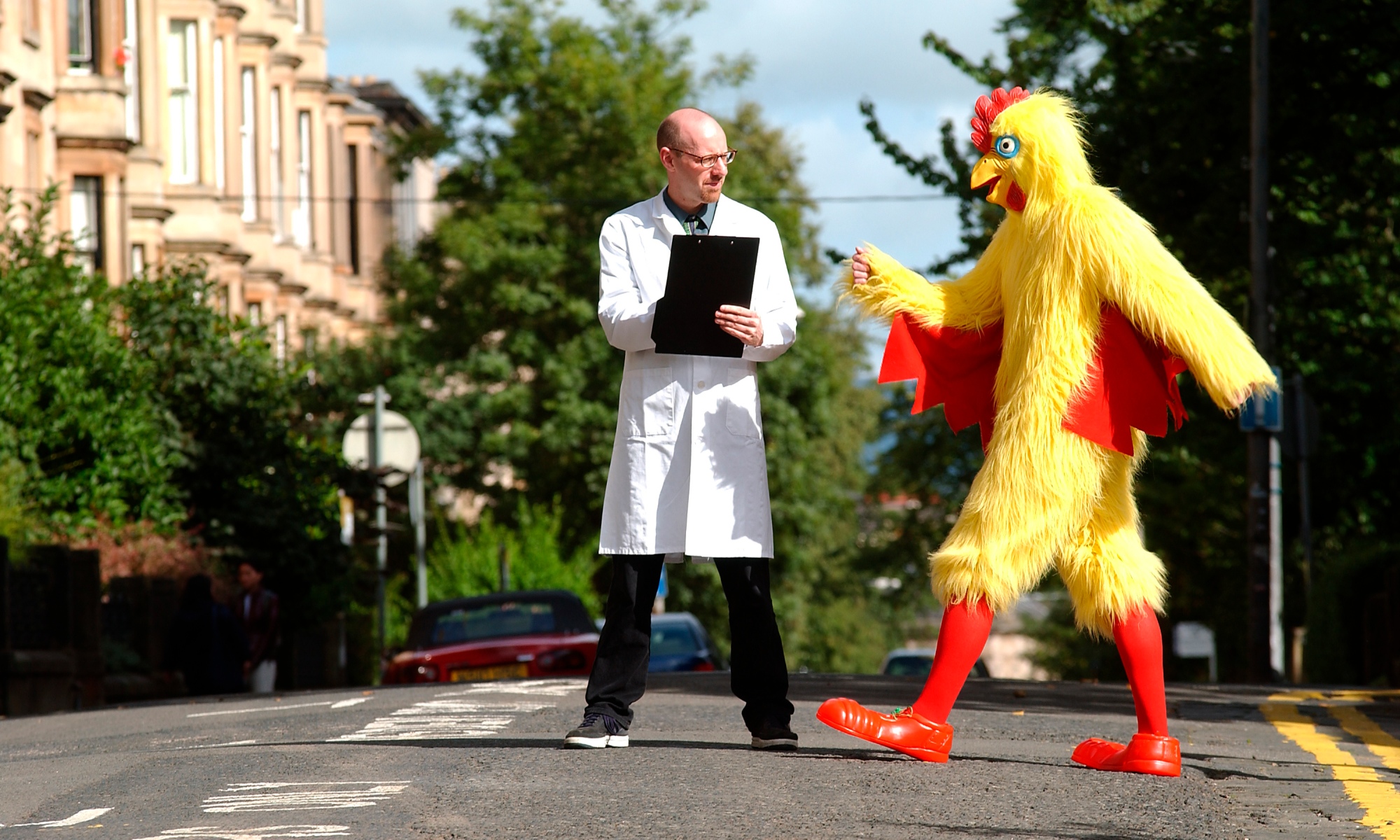 I am frequently asked about the 2001 LaughLab project, so I thought I would present a brief outline of what we did and what we found……..

In June 2001, I teamed up with the British Science Association to carry out ‘LaughLab’ – the scientific search for the world’s funniest joke.

The project website had two sections.  In one part, people could input their favourite joke and submit it to an archive.  In the second section, people could answer a few simple questions about themselves (such as their sex, age, and nationality), and then rate how funny they found five randomly selected jokes on a five-point scale ranging from ‘not very funny’ to ‘very funny’.

Early findings
We took our first in-depth look at our data three months into the project.  The top joke at that early stage had been submitted by Geoff Anandappa, from Blackpool in the northwest of England, and involved the famous fictional detective Sherlock Holmes and his long-suffering sidekick, Dr Watson:

Sherlock Holmes and Dr Watson were going camping.  They pitched their tent under the stars and went to sleep.  Sometime in the middle of the night Holmes woke Watson up and said: “Watson, look up at the stars, and tell me what you see.”
Watson replied: “I see millions and millions of stars.”
Holmes said: “and what do you deduce from that?”
Watson replied: “Well, if there are millions of stars, and if even a few of those have planets, it’s quite likely there are some planets like earth out there.  And if there are a few planets like earth out there, there might also be life.”
And Holmes said: “Watson, you idiot, it means that somebody stole our tent.”

Science and humour
During the project, we approached some of Britain’s best-known scientists and science writers, and ask them to submit their favourite jokes into LaughLab.   The joke that went on to win the ‘best joke submitted by a well-known scientist’ category, was submitted by Nobel laureate, and professor of chemistry, Sir Harry Kroto: 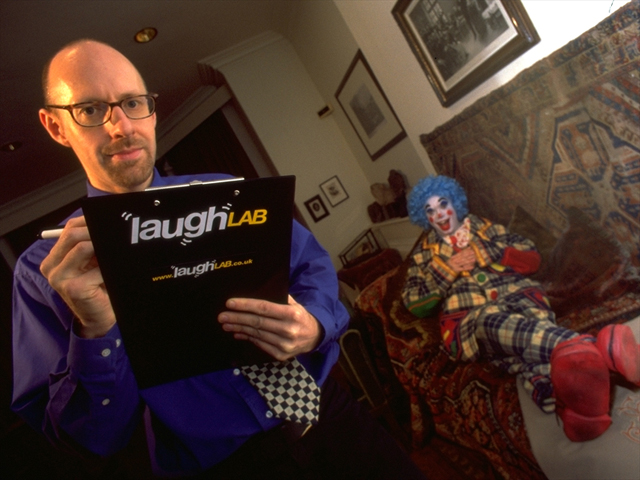 Computers and jokes
We also examined another source of humour – computers.  LaughLab attracted lots of jokes about this topic (‘The software said it needed Windows 98 or better, so I bought a Mac’).  However, it also contained a few jokes actually written by a computer.

A few years ago, Dr Graham Ritchie and Dr Kim Binsted created a computer programme that could produce jokes .  We were keen to discover if computers were funnier than humans, and so entered several of the computer’s best jokes into LaughLab.  The majority of them received some of the lowest ratings in the archive.

However, one example of computer comedy was surprisingly successful, and beat about 250 human jokes:  “What kind of murderer has fibre?  A cereal killer.”

Weasels
In January 2002, we started receiving lots of jokes ending with the same punchline: ‘There’s a weasel chomping on my privates’.  Unbeknown to us, the internationally syndicated American humorist Dave Barry had just devoted an entire column to our work in The International Herald Tribune .

In a previous column, Barry claimed that any sentence can be made much funnier by the insertion of the word ‘weasel’ . In his column concerned with LaughLab, Barry repeated his theory, and urged his readers to submit jokes to our experiment that ended with the punchline ‘There’s a weasel chomping on my privates’.   Within just a few days we had received over 1,500 ‘weasel chomping’ jokes.

The comedy K
Early in the experiment, we received the following submission:

There were two cows in a field. One said: “Moo.” The other one said: “I was going to say that!”

We decided to use the joke as a basis for a little experiment.  We re-entered the joke into archive several times, using a different animal and noise.   We had two tigers going ‘Gruurrr’, two birds going ‘Cheep’, two mice going ‘Eeek’, two dogs going ‘Woof’, and so on.  At the end of the study, we examined what effect the different animals had had on how funny people found the joke.

Two ducks were sitting in a pond, one of the ducks said: “Quack.” The other duck said: “I was going to say that!”

Interestingly, the ‘k’ sound (as in the ‘hard c’) is associated with both the word ‘Quack’ and ‘duck’, has long been seen by comedians and comedy writers as being especially funny.  The idea of the comedy ‘k’ has certainly made it into popular culture.  There was also an episode of The Simpsons, in which Krusty The Clown (note the ‘k’s) visits a faith healer because he has paralysed his vocal chords trying to cram too many ‘comedy k’s’ into his routines.  After being healed, Krusty exclaims that he is overjoyed to get his comedy k’s back, celebrates by shouting out ‘King Kong’, ‘cold-cock’, ‘Kato Kaelin’, and kisses the faith healer as a sign of gratitude. 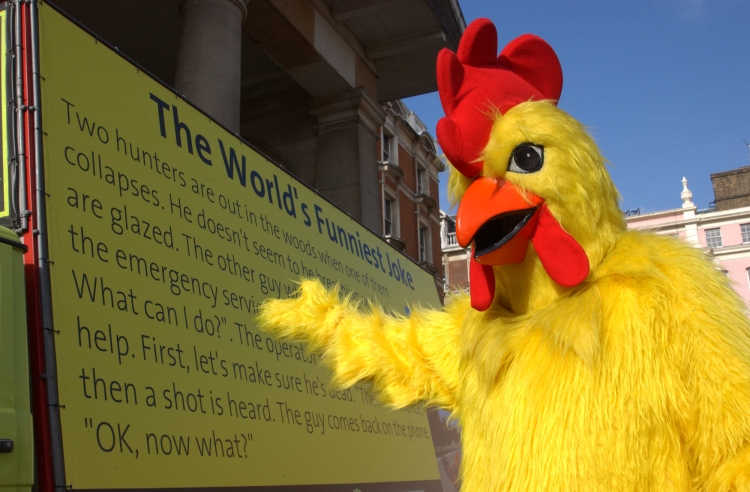 Our findings
By the end of the project we had received 40,000 jokes, and had them rated by more than 350,000 people from 70 countries.  We were awarded a Guinness World Record for conducting one of the largest experiments in history, and made the cover story of The New Yorker.

The top joke, as voted by Americans, was as follows:

At the parade, the Colonel noticed something unusual going on and asked the Major: “Major Barry, what the devil’s wrong with Sergeant Jones’ platoon? They seem to be all twitching and jumping about.” “Well sir,” says Major Barry after a moment of observation. “There seems to be a weasel chomping on his privates.”

Dave Barry had been successful, and managed to make the top American joke weasel-oriented.  He had less influence over the votes cast by those outside of America.   We carefully went through the huge archive and found our top joke:

Two hunters are out in the woods when one of them collapses. He doesn’t seem to be breathing and his eyes are glazed.  The other guy whips out his phone and calls the emergency services.  He gasps, “My friend is dead! What can I do?”.  The operator says “Calm down.  I can help.  First, let’s make sure he’s dead.”  There is a silence, then a shot is heard.  Back on the phone, the guy says “OK, now what?”

The database told us that the winning joke had been submitted by a psychiatrist from Manchester in Britain named Gurpal Gosall.  We contacted Gurpal and he explained how he sometimes told the joke to cheer up his patients, noting that: ‘…it makes people feel better, because it reminds them that there is always someone out there who is doing something more stupid than themselves’.

Five years after the study, I was watching a documentary film about Spike Milligan, comedian and co-founder of the Goons, and that the programme contained a very early version of our winning joke.  The documentary (the title of which, I Told You I Was Ill, was based on Spike’s epitaph) contained a brief clip from a 1951 BBC programme called London Entertains with the following early Goon sketch:

It is highly unusual to be able to track down the source of a joke, because their origins tend to become lost in the mists of time.  Spike Milligan had died in 2002, but with the help of the documentary makers, I contacted his daughter Sile, and she confirmed that it was highly likely that her father would have written the material.  We announced that we believed we had identified the author of the world’s funniest joke, and, LaughLab made headlines again!

LaughLab has now finished but is described in my book, Quirkology.

Read our final report about the project here and download over 1000 of the LaughLab jokes (all clean!) here. 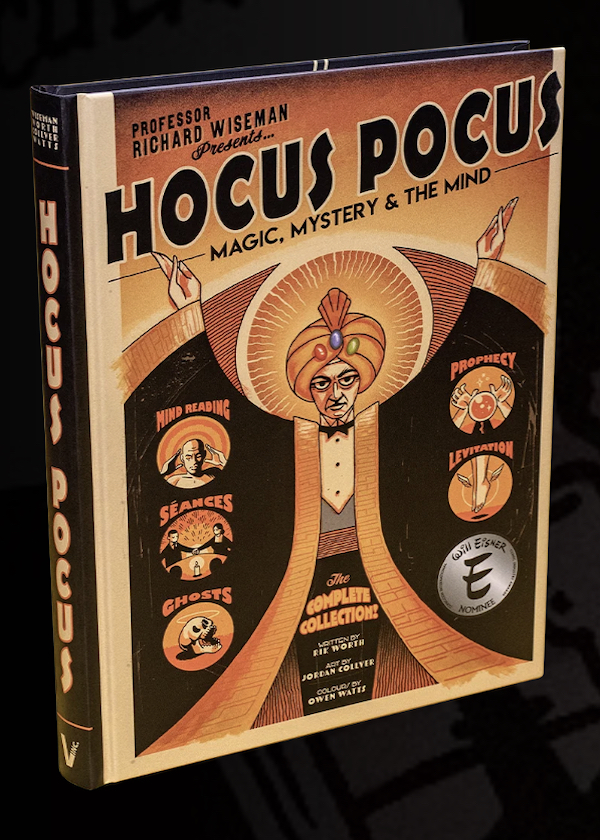